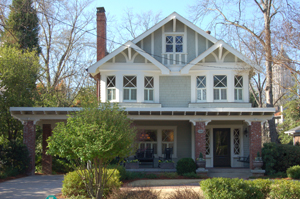 Listed on the National Register of Historic Places, Ansley Park is a vital intown community just steps from Woodruff Arts Center, the High Museum of Art and impressive, gleaming office complexes. Edwin P. Ansley, along with several financial partners, established this thriving intown neighborhood in 1904. Originally envisioned as a motorcar suburb, Ansley Park went through substantial changes from 1904 until 1913. The National Park Service commends its thoughtful design: “Completed by 1930, the neighborhood encompasses approximately 275 acres and includes single-family residences, apartments, and a church. It features a curvilinear arrangement of streets, numerous parks, and a wide range of eclectic and period architectural styles. Streets in the district are landscaped on either side like parkways. This streetscape blends with the landscaping of adjoining lots to create the appearance of a vast public park. The principal parks of the district are Winn Park and McClatchy Park.”

Mature and green, Ansley Park borders Piedmont Park and surrounds the Ansley Golf Club, which is situated alongside the banks of Clear Creek. The active Ansley Park Civic Association coordinates such activities as the fall barbeque, Halloween parade, Christmas caroling and neighborhood socials.

Residents and visitors alike also take part in Taste of Ansley and the Tour of Homes annually.

Patti is the consummate professional in all of her real estate transactions.  One of the best in the business.